Started by Max Schubert around 1951as an attempt to make a French-style wine.  Since 1990 the "Hermitage" was dropped from the name as EU law forbade the name of a French town in an Australian wine.   "Hermitage" was also used as a name for the Shiraz the wine is made from, but now some Cabernet Sauvignon is also used.

Initially the grapes came from two vineyards in South Australia (one called "Grange"), and later on from other places in Australia; but now possibly the grapes seem to be sourced from all over Australia.

There is no locality or terroir to this wine.  In this aspect it is a bit like Liebfraumilch, or like the basic Champagnes or Cognacs, where each year grapes from various area are selected, which may lead to geographically differently selected and composed wines every year.

It is owned by the Treasury Wine Estates Corporation. 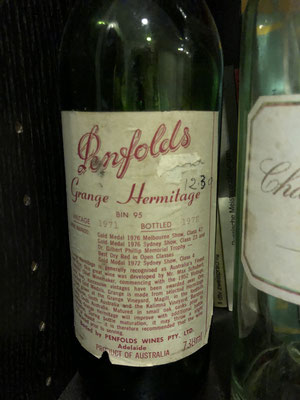