INTERNATIONAL FLIGHT AT THE TOP OF THE PAGE

DOMESTIC FLIGHTS AT THE BOTTOM OF THE PAGE

The seats were good in size and design, but the storage space was limited.

The seat positioning system worked well, and the ability to have a take-off and landing position that was a bit reclined increased the comfort.

The electronic connection and plugs were good in number, and they worked well.

The legroom was too narrow and made if difficult to sleep comfortably, unless one never moved at all over night.

The entertainment selection was good, but focused a bit too much on light fare.

The food was good.  No wine list existed, but the choice was poor anyway.  The selection spirits was adequate, the coffee was mediocre, and the stemware of an unacceptably low standard.


The seats are fairly basic Business Class seats and not as good as in some other airlines' seats on their A380s.

There is sufficient space between the seats to move.

The storage space is limited for aisle seats, but the foot space is good when the flat bed is made up.

The bathroom is standard in size and amenities are on the scarce side.

The food is of a good standard overall, but THERE IS NO WINE LIST, which is unacceptable on an international business class flight.  Qantas staff seems to get a crash course in wine for a few days and are the called "Qantas Sommeliers"  - maybe properly qualified sommeliers should protest this pretense.  I asked what white wines were available; the answer was "We have a Chardonnay or a Sauvignon Blanc."  Very informative.

March  2019 update:  Finally proper stemware was used in the SYD LAX A380-800 Business Class section (hooray!) - Qantas can be civilised if they want to.

The seats were on the small side and of the older type; they were not flatbeds - and upgrading was not available as the plane did not have a First Class cabin.

The service was excellent, and this was the highlight of the flight.

QF41 SYD CGK Sydney Jakarta A-330:  This place was equipped with rather mediocre - for a long-haul flight - Business Class seats with narrow and cramped leg area.  The food was adequate, the wine selection substandard and the stemware completely substandard.   The service, however, was friendly and helpful.

Good seats overall during the daytime, as the flatbed has very narrow legroom, with average food, very poor stemware (water glasses only), no wine list, but a good crew.  Good entertainment. November 2018.  3.5/5

The seats (the narrow legroom matters less during a day flight) and the  all the rest was unchanged on another flight in February 2019 on the same Boeing 787-9.  3.5/5

The check-in area was rather deserted compared to pre-pandemic days. 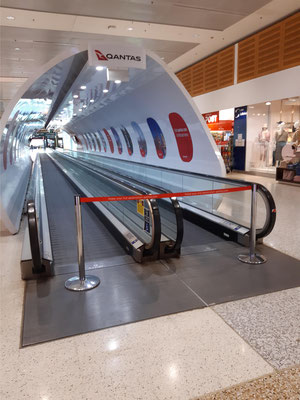 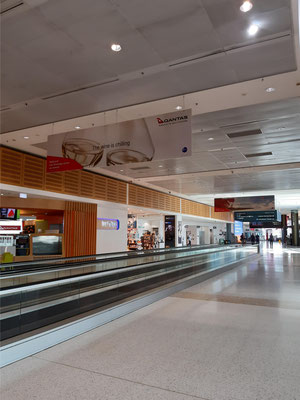 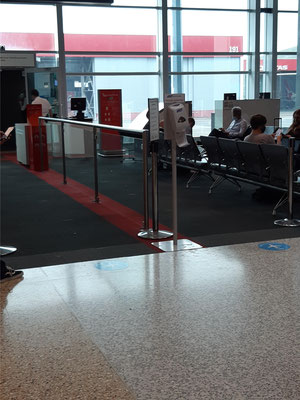 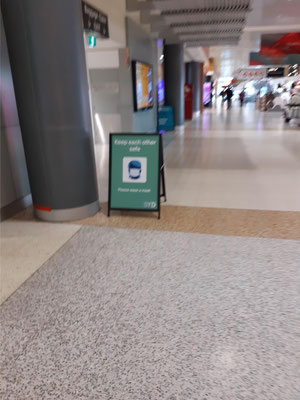 The rest of the airport was empty too.

The usual seats were used, which were very good for the short journey.  The entertainment system was rather poor.

Whilst there was a bit of a reduction in choice, the hot lunch service was nearly back to the standards before COVID-19 hit Australia.

On domestic routes Qantas sometimes uses planes designed for long-haul flights; this was one of those flights.

The Business Class Cabin was spacious.

The food tray table surface was not really clean and the stemware was poor.

This time the seats were the older seats in the Boeing 737, but the morning meal was good and a proper fried breakfast.  The lack of tablecloth and of cleaning the tables shows suboptimal hygiene.    The service was very attentive.   3.5/5