The Trilby is probably derived from the Tyrolean Hat, which is also known as the Bavarian Hat or the Alpine Hat, which denotes its geographical origin; it is steeped in Alpine Folklore since around the 1830s.  The width of the brim varies somewhat from small to wide in the North vs. the South of Tyrol.

The Trilby has a relatively short brim, which is turned down at the front brim and angled upwards and the back brim.   Originally made from rabbit felt, is is nowadays made form various materials.  In brown it is a classic worn at country races in the UK and elsewhere.

This had has its name from the heroine in a play based on the 1894 novel Trilby by George du Maurier, where at hat of this style was worn in the first production of the play in a London theatre.

Some say the Trilby was one of the inspirations for the Homburg.

A two-tone Summer Trilby made of paper - for sunny days.

The Travel Trilby is rollable and able to be transported in a tube, similar to the Panama Hat. 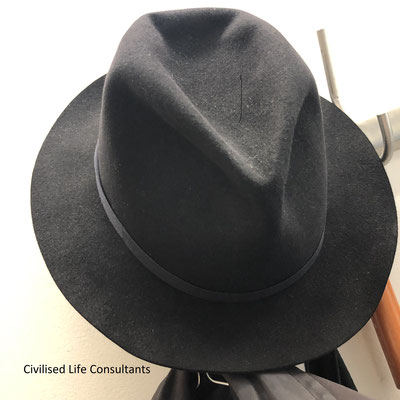 A travel Trilby from Lock Hatters in London, made from wild hare fur that is rollable.